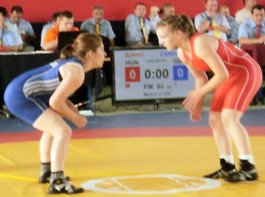 Lisa Cardwell, a member of The Northern Ireland Talent Squad, a select group of wrestlers from across Northern Ireland; led by Talent Development Coach John O’Rawe, accepted an invitation from the British Wrestling Association to represent GB at the European Cadet Championships held in Poland from 9-14 August 2011.

The competition ran for six days and up against Hungary’s Eliana Szabo, Lisa lost 0-8 in the first round and 6-9 in the second placing 13/20 overall. Although not in the medals, Lisa scored points from Szabo the eventual Bronze medalist, which is a great achievement.
Following the event, Anatolii Kharytoniuk, England Development Coach, impressed by her performance, invited Lisa, also a member of the GB National Talent Squad, to attend the Wrestling Academy in Manchester to train with the Senior National Development Squad, usually reserved for athletes on an international pathway.

Although only coming into the sport in 2010, Lisa has accumulated junior Irish and GB championship titles and has progressed rapidly from club level wrestling through to selection for the Northern Ireland Talent Squad and onwards to the GB National Squad.

Lisa has personal aspirations of becoming part of the first Northern Ireland Commonwealth Games Female Wrestling team at the Glasgow Games 2014, and together with the continual support delivered by The Northern Ireland Wrestling Association, Sport NI and The Performer Development Centre, (PDC-supports talented athletes within Olympic and Commonwealth sports) this may perhaps become a reality.