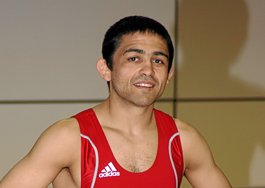 The following announcement was sent out nationally by Press Association on 12th July, (the Press Association is a very important avenue as it distributes copy to all national and regional media throughout the country): –

FOUR MEDALS FOR BRIT WRESTLERS
British wrestlers claimed four medals at the Spanish Grand Prix tournament in Madrid today.
Krasimir Krastanov from Manchester took gold in the 55-kilogram category thanks to a points victory over Tim Schleicher of Germany.
London Olympic prospect Leon Rattigan, Mohammadali Haghidoust and Jayne Clayson were the bronze medallists, in the 96, 74 and women’s 55 kilogram divisions respectively.
“It was another terrific performance from our wrestlers, and to bring home four medals from a prestigious European tournament is a great result,” said GB performance director Shaun Morley.
end
121934 JUL 09
Share