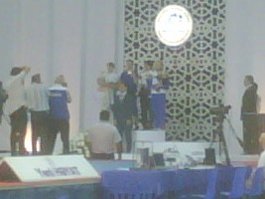 For the first time in its history, Great Britain has taken two medals in the Golden Grand Prix in Baku, Azerbaijan.

This tournament is considered one of the toughest, if not the toughest, tournament in the world outside the World Championships themselves.  37 countries qualified athletes for this final that will play an important role in the ranking of the 3 best wrestlers of the year.

The first medal came from Yana Rattigan who took Bronze in the 48kg class. Yana had lost to the current World Champion, Maria Rattigan, earlier in the tournament.  But she fought her way back culminating in her bronze medal match against Nurmatova (KGZ). After a tentative start, Yana threw her opponent and eventually pinned her to take a podium place.

Olga Butkevych overcame a number of high quality opponents on the road to the final where she faced Ahmadli (AZE). This was a very tight match in a very hostile atmosphere as her opponent was fighting on home territory.

Olga lost the first round 1-0 and then narrowly lost the second 2-1 to loose the match but take the silver medal.
Both excellent results considering a number of World and European medalists did not even make the podium.
Today’s performances are a real milestone in the development of these athletes and clear evidence that they are of World Class stature.