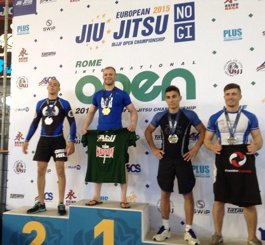 With an entry of 35 in the BLUE/Adult/Male/Light division, Michael triumphed, showing the importance of core wrestling technique learned over his years in wrestling clubs and with the British Wrestling Association World Class Wrestling Programme for London 2012.

Also competing in Rome was Martin McLaughlin, one of Northern Ireland’s UKCC Level 2 coaches, who was runner-up in the BROWN/Master 2/Male/Medium Heavy division.

In 2014, Michael brought home the 74kg Bronze medal for England in freestyle wrestling in the 2014 Glasgow Commonwealth Games.

As there becomes more interaction and cross-overs between the sports, increasing focus will fall on the importance of core wrestling skills practised in Freestyle and Greco-Roman wrestling.