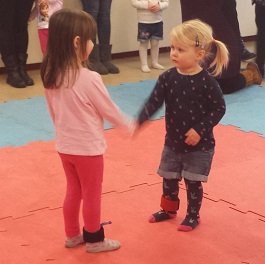 Club development activities with the aim of increasing interactions with their local community are going well at Sharples Wrestling Club in Bolton.

The formation of a new regular group is just one part of that launch event that is working out well for Sharples wrestling club and its community.

The Launch had highlighted a “Future Heroes” session for 3 to 5yr olds that was already running successfully. Ian Davies of Bolton Local Authority attended the Launch and expressed his interest in getting a group active at John Holts Community Centre in Westhoughton.

Ian’s group was actually a Mothers and Toddlers group. After a successful “taster session” set up by Ian and Sharples Wrestling Club, delivery of a further six sessions has been pencilled in.

After February’s first session Sharples wrestling club had parents and their toddlers arrive at the club to take part in the “Future Heroes” session.

Said Eddy Kavanagh, Wrestling Development Officer at the club, “I think this success shows how networking and partnerships in the community works perfectly.”

Networking and partnerships by clubs in their community is a theme promoted by Svend Elkjaer’s Sport Marketing Network (link,) experts in the field who had been commissioned by the British Wrestling Association to work with wrestling clubs to grow participation across England. 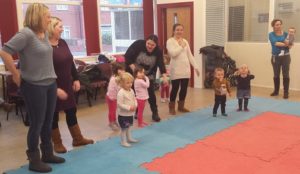 “Svend is a big believer in this and so am I,” continued Eddy. “Networking and partnership and like this is what is going to make a club like ours financially self-sustaining with benefit to all.”

Awareness of the club has been further raised as a result of media interest in the new initiative from BBC Northwest, BBC Radio Manchester and BBC Radio Lancashire.

Social media is also playing its part in helping to spread the word with one of the young mums sending a video clip of herself doing a bit of wrestling to a Bolton at Home Director which he then put on his Facebook page and now seen by hundreds.

This is just one success that has come from the Community Launch event and working in partnership with other groups.