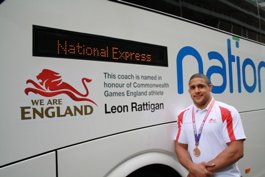 Well, it is one way of getting a UK Coach Award.  On Tuesday, National Express named one of their coaches “Leon Rattigan” in his honour.

Leon appeared to find out about the award whilst being interviewed live-on-air for BBC Radio Manchester’s Phil Trow “Monday Evenings” programme in which he took part with Eddy Kavanagh (one of two deputy England Team Leaders, the other being Trevor Hoskins,) and fellow selected Commonwealth athlete Philip Roberts.

National Express is one of the sponsors of Team England and has been since the last 2010 Commonwealth Games in Delhi in which Leon Rattigan, Philip Roberts and Michael Grundy competed and Leon won a Bronze medal.

As part of National Express’ support for the athletes they kindly provided the athletes with free coach passes since 2010 – and these passes were due to expire this year.

However, in the run up to the Glasgow games athletes were e-mailed who had benefitted from the coach passes.  Leon responded and a coach was named after him and he received an extension of two years to his coach pass!

At the naming cermony, Leon (and Michael Grundy who also participated in the ceremony,) did themselves proud and were a credit to the Wrestling family. 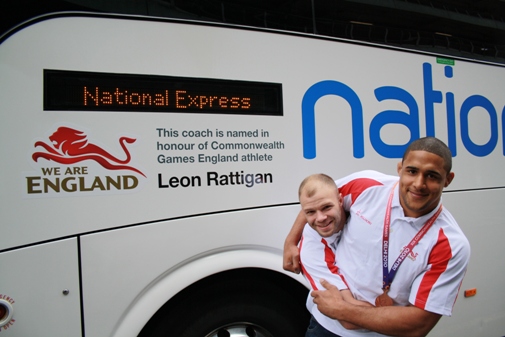