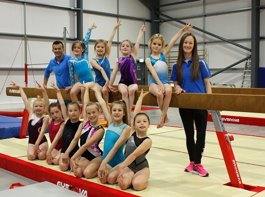 Following an inspiring summer of British gymnastics, the North-East of Scotland is set to gain its own national-standard facility.

The organisation, which coaches more than 1000 members per week, is owned by former international gymnast Laura Etko and her husband Vio, a Commonwealth Games bronze medallist in wrestling.

Established in 2008, Laura’s Gym and V Wrestling Club offer a range of gymnastics and wrestling coached programmes for youngsters of all ages and abilities.

The new facility is believed to be the first of its kind in the area and one of the foremost in Scotland. It incorporates a full-size spring floor area, four competition-standard balance beams, two sets of uneven bars, plus vault apparatus, runways and springboards. A sunken foam pit provides a safe practice area for bars and other tumbling work. 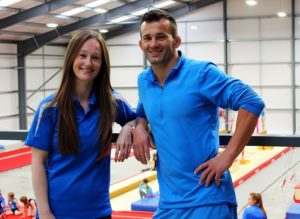 “We are incredibly proud to have reached this stage and are immensely grateful to our members, whose support has made it possible,” says Laura Etko, founder, Laura’s Gym. “Our new gymnastics centre is entirely self-funded, as we strongly believe that there is a local demand for it.

“The new gymnasium will enable a greater number of young people to access our existing gymnastics and wrestling programmes, as well as allowing us to introduce additional complementary activities and classes.

It also has the potential to act as a host venue for regional and national competitive gymnastics events, which we hope will have spin-off benefits for the North-East.”

Members of the public will have the opportunity to view the new facilities during an open day from 9 am–6 pm on Friday, 21 October 2016. Those who attend can watch classes in action, meet the Laura’s Gym team and reserve spaces on a special series of taster sessions.

The award-winning company employs 18 people, who develop and deliver its range of gymnastics and wrestling programmes.

Based in Oldmeldrum adjacent to the Hoodles Playbarn & Coffee Shop complex, the company also operates a separate adult gym, plus a smaller multi-purpose sports hall.