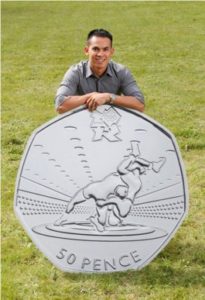 A new 50p coin celebrating the sport of Wrestling has been launched by the Royal Mint.

The coin, which features two wrestlers struggling to victory in a stadium full of lights and spectators, is one of 29 designs that represent the 29 Olympic and Paralympic sports to be contested during London 2012.

The Wrestling themed 50p was designed by Roderick Enriquez from London. Roderick chose to design the Wrestling coin as he felt it is one of the oldest and most distinguished sports associated with both the modern and ancient Olympic Games.

Commenting on his win, Roderick said, “I simply cannot believe it as I know there were thousands upon thousands of entries submitted to this competition! I’m so delighted to have won, especially as a Filipino-British national. As that’s what I believe London 2012 should be, hosted by people from many cultural backgrounds!”

Dave Knight, the Royal Mint’s Director of Commemorative Coin, said: “Every one of the winners is making history. Their coins will become treasured mementos of the biggest sporting event to happen on UK shores for over half a century and we hope will encourage a new generation of collectors.

“Every coin captures the spirit, excitement and passion of the Olympics and Paralympics. In isolation each is a work of art, together they are an inspirational portrait of a sporting phenomenon. The Royal Mint is immensely proud to be part of London 2012 and we’re thrilled that this competition has enabled the general public to play a part too.”

Roderick’s Wrestling creation is one in a series of 29 officially licensed London 2012 50p commemorative coins, designed by members of the public as lasting mementos of the London 2012 Olympic Games and Paralympic Games. Many designs had to be assessed and approved by the official Olympic sporting Association to ensure an accurate depiction of the sport was portrayed before the coin was struck.

His Wrestling design will be found on millions of 50p coins in people’s change from this year, when the Royal Mint’s London 2012 sports collection goes into general circulation. So look out in your change!

Alternatively a pristine uncirculated version of the Wrestling coin is available to buy. Visit www.royalmint.com/sportscollection or call 0845 60 88 222 to purchase.