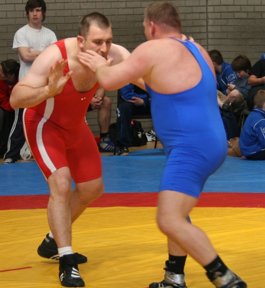 The Northern Ireland Commonwealth Games Council has begun to release the names of the first batch of athletes and coaches to be selected to represent the country at the Commonwealth Games, Delhi from 3-14 October 2010.
John O’Rawe has been confirmed as the NI wrestling coach and Mark Montgomery will compete in the under 96kgs freestyle event.
With a few qualifying events remaining selection is still open to other competitors who can hit the necessary targets.
Nevertheless the NIWA is proud to have representation at such a prestigious event.
Barry Pollin, Chairman of the NIWA said, “It has been 16 years since our Association had a wrestler in this tournament and we have all been working extremely hard to put that right, good luck to John and Mark.”