Olympic medallists inspire the next generation 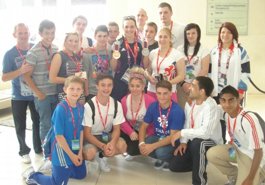 Members of the National Talent Squad and Britain’s first Olympian wrestler, Olga Butkevych, gained inspiration from Victoria Pendleton and Dame Kelly Holmes when they met up at Team GB House on 10th August.

The visit to Team GB House, the ExCel Arena for the Olympic wrestling competition and other London sites was part of a nine day training camp and competition at the British Wrestling Academy at Salford, with participation by young wrestlers from USA, Canada and Austria. (link) 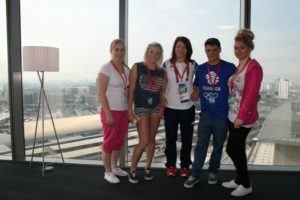 Team members enjoyed views over the Olympic Park from Team GB House which is on the 9th floor of Westfield Stratford City shopping centre and was a key part of the team’s Games time operation. 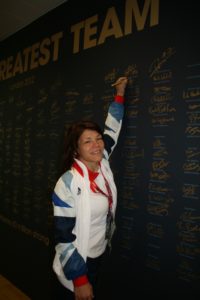 As well as meeting with Victoria Pendleton (Gold medal in the keirin and Silver in the individual sprint,) and Dame Kelly Holmes (double Gold medal winner at the Athens 2004 Olympics in 800m and 1500m events,) team members watched as Olga signed her name alongside signatures of the other 540 members of Team GB on a commemorative wall. 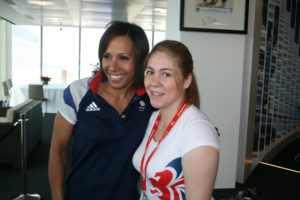 (Dame Kelly shown to right, with Victoria Pendleton signed photo behind!)
Team GB House accommodated the main operation centre of around 80 British Olympic Association staff and volunteers with responsibilities for key services including ticketing, performance analysis, a press centre for non-Olympic accredited media, supporting the operations team across numerous satellite Team GB villages and a dedicated safe and secure space where athletes could meet their friends and family. 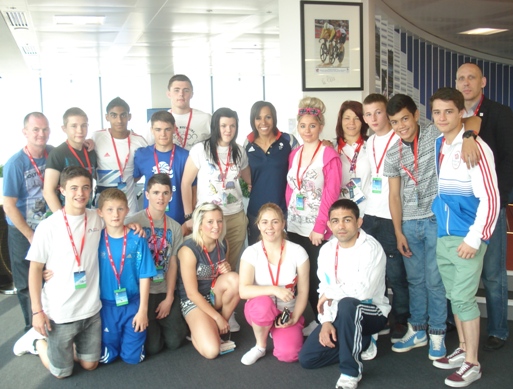