Quarterly Report from the Chair of British Wrestling 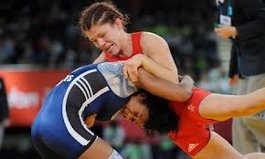 Don’t call me “Sir” because I will look behind me thinking my Dad is lurking somewhere – Cary is fine. I was appointed Chairman of the British (Olympic) Wrestling Association in October 2013.

I wrestled: in Junior High School, High School and for my University. Towards the end of my wrestling, I trained with and was coached by some of the best wrestlers the USA has put forth: Doug Blubaugh – 1960 Olympic Gold and outstanding wrestler of the 1960 Olympics; Jim Humphries – National Collegiate Champion, 5 time US Freestyle Champion, Silver Medal World Freestyle, National Olympic Coach of Canada and USA Freestyle; Bill Scherr – National Collegiate and Greco-Roman Champion, Pan American Champion, World Champion and 1988 Olympic Bronze; Jim Scherr, Bill’s brother and equally as successful; and Dave Schultz – just a wrestling legend.

I wasn’t as good a wrestler as I could have been. And I wasn’t because I wasn’t focused and I didn’t have a vision. But I loved the sport, and love it still. And age and experience have sharpened my understanding.
I play a lot of competitive rugby these days, still – with dudes half my age. And I have started wrestling again – for fun.

I am a fully paid up, senior £38 member of the BWA. I am also 2/3s the way the through the UKCC Level 2 Coaching course, and I have to admit, I have learned a lot, more than I thought I would, and much has changed since the early 80s when I was wrestling seriously. We need Level 2 coaches. Email me and let’s talk about this. (chair@britishwrestling.org)

I’ve joined us in a time of change, but change for the better. I have been visiting as many places in the last 5 months as my work, wife and 4 children and several dear friends will accommodate.

I have been to Northern Ireland, Scotland, Bolton, Salford and most London clubs. Wales, Aspull, Legion and others are my next targets.

I have attended the regional AGMs for the South and Midlands. Mainly I have been listening and asking questions and thinking … hard … about ambition and discipline and teamwork and the will to win.

And soon we have the privilege of Scotland hosting the Commonwealth Games in Glasgow, and let me tell you: there is no place more inspirational to wrestle than the Pit in the Sir Chris Hoy Velodrome, which I have done with the Scottish High Performance Programme.

I think wrestling tickets are sold out, but try anyway – The Scottish Exhibition Conference Centre, where the competition will be located, will be like Mad Max’s Thunderdome.

We are also collecting video and stills of British wrestling from seniors to juniors and open categories. We will be making promotional videos that we can use to inspire and cajole sponsors, stakeholders and future members and supporters. Use the link below to drop these and e-mail Colin, CEO if you encounter a problem. (Link)

Thoughts About Us
The past is the past. Let’s not live in it because it is unchangeable. Let’s not replicate it, because through living for now and tomorrow, we can change.

Let us create who we are meant to be. I’ve listened. I sort of understand. Let me tell you, as a lawyer and solicitor of now some 24 years qualified – justice is imperfect, if it comes at all.

Everyone I have met is trying hard. Everyone loves this sport. Everyone has some good ideas. Our new-ish structures have been put in place because in the wisdom and experience of those that fund us (Sport England, Wales, Scotland, Northern Ireland and UK) these work best.

It is not for us to argue, but to believe and strive to make them work. And when we do, they will.

Our Mission
Our mission is simple. We want to put the Olympic styles of wrestling (Freestyle and Greco-Roman) indelibly into Great Britains’ minds, and into the schools, universities and clubs of our 4 home nations.
It won’t be for everyone to do, but everyone will know that what we are about isn’t masked, spandexed, jumping-off-the-turnbuckle WWE. 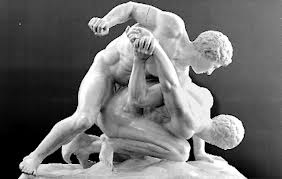 We are the descendants of the Pankration, the ancient sport of wrestling contested at the games in Olympus, Nemea, the Isthmus and Pythia. We are everything that made ancient Greece the beacon of the world since then.

We aspire to have wrestling as one of the core sports in British educational and social curriculum.
And we believe our values will soon enough be recognized as worthy of these great nation states, known as Great Britain – who have – through courage, ambition, discipline and the will to win – created all that is good in the world today.

The best of the world speaks our language, follows our legal system, adopts aspects of our culture, takes intelligent risks (thus moving us along) and values freedom over all other virtues.
We have patience, understanding, we queue, we have civic virtues that others admire and understand. Relative to others we are selfless, and yet highly individualistic.
Imagine that: fiercely independent and yet sacrificing to contribute to the common good. This is us – this is British Wrestling.

Our Values
I have asked around, taken soundings and I have offered my views as well. These are not set in stone, but I ask you now to consider whether the four virtues, each painted on a wall of your wrestling room – bold, unmissable, the thing you see when fighting from underneath or off your back or in a control position: Courage, Ambition, Discipline, and Dynamis (the ancient Greek word for ‘the will to win’).
Could these be our values? Could these be the basis from which we teach, and learn, give and take, win and lose?

What Can We Be?
What do we want to be? You might not know it but wrestling is an old tradition in the UK. Cornish and Welsh, Lancastrian, Midlands and the Industrial belt, Scottish, and even in the Big Smoke, though here it comes late through the waves of immigrants from Western Africa, the Middle and Near East, and the odd canuck and septic.
Here is what I think we can be in 10 years time.

We can, all 4 home nations – Great Britain, be the winningest collection of wrestlers in the Commonwealth Games by some margin.
And, if we get our structures right, and get Olympic wrestling embedded in schools, universities, wrestling and other combat sport clubs, including Rugby, in 20 years we can be top 10 in the world.
The world does not speak our language by accident. It does not follow our laws, however begrudgingly and pissed off they act, for nothing.
It does so by the example and resolve and kindness and good humour shown by the British people, generation after generation after generation. And International competitions aside, what we aspire to build day-by-day in those that wrestle, and are affiliated with wrestling, is Courage – is Ambition – is Discipline – and is the Will to Win.

How Can We Get There?
You who are reading this are most likely members or parents. We need your belief in what we are setting out to do. Not a quiet belief, but a belief that quietly through action and example brings people to us.
For a while this may seem like hard work for we haven’t enough clubs or coaches yet to cover the nations.

Unlike other sports, most Olympic Wrestling Champions don’t win Gold until they are between 23 and 31 years old and they have wrestled for 15-20 years.
This isn’t a sport of immediate gratification, but as I tell my Rugby boys, ‘anything worth having, is worth fighting for’.
The new Talent Pathway lays out a “ladder to the future” to take our wrestlers to these heights.

And when we wrestle, it will be to the silently deafening mantra of Courage – Ambition – Discipline – Dynamis. Money will play its part. But money, that fickle mistress, seems to only follow success.

What Can You Do?
Pay your membership dues. The actual money you pay is only a small part of the benefit.
However, when Sport England sees that registered members rise 100% or 200% or more, that equates to hundreds of thousands, even millions, more pounds in funding.
We have 3 paid employees, and I can tell you, they ain’t highly paid. We could honestly use more.

And guys, that arm was built by wrestling. Who wouldn’t want a pair of sledgehammers like that?