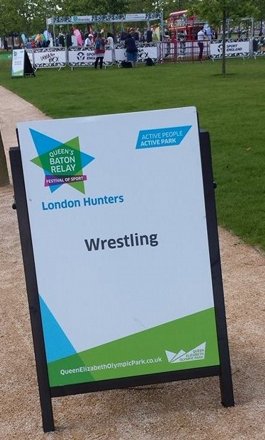 The four-time Olympic gold medallist kicked-off a day of sporting celebration in London’s Olympic Park by dropping from the 114.5m sculpture, the tallest of its kind in the UK.

The Queens Baton Relay was the centre-piece of a fantastic celebration of sport and Team England ahead of the Glasgow 2014 Commonwealth Games. 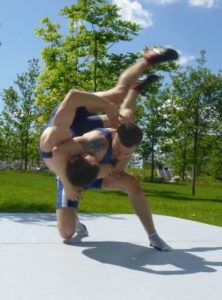 20,000 members of the public were scheduled to attend a Festival of Sport with 32 different activities to try, including wrestling.  A terrific day to inspire Londoners to get behind Team England.

The Festival of Sport was one of the flagship events in Queen Elizabeth Olympic Park’s Active People, Active Park programme, which offered local residents a huge range of opportunities to get active right on their doorstep.

London Hunters volunteered to represent Wrestling among the 32 sports in the Park. The London Hunters crew provided all the visitors with an inside into Olympic wrestling: demonstrations, chat, information, and also an intense interaction between crew members and the visitors through different activities the whole day. 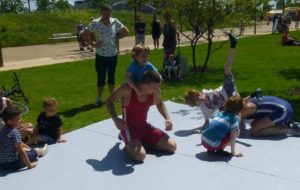 The main objective was to highlight the simplicity and practicality of wrestling, which only needs little equipment but provides so much fun and challenges. 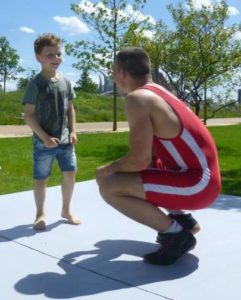 A bright Sunday for an entertaining wrestling time, all went home with the capability to differentiate Olympic wrestling to the stage act seen on TV.

Before visiting London, the Queen’s Baton will have visited 68 of the 70 Commonwealth nations and will be en route to its final journey through Scotland to the start of the Glasgow 2014 Commonwealth Games.

The Baton left the Queen Elizabeth Park crowds at around 4pm for a Downing Street visit to meet the Prime Minister before continuing its journey north.