After long and distinguished service by Dave Sudron, which included achieving the rare heights of Olympic UWW Referee status and refereeing at the London 2012 Olympics and Glasgow 2014 Commonwealth Games, the British Wrestling Association is now looking to appoint a new Lead Technical Officer upon Dave’s retirement and UWW rules on the age-limits of international referees.

The new Lead Technical Official is expected to have an in-depth knowledge of wrestling and will have an understanding of the way Olympic sports operate in the UK arena.  He or She will clearly have an abiding enthusiasm for the sport of Wresting.

Full information about the recruitment and role is available on the British Wrestling Website at the following link:-

The closing date for applications (via email to admin@britishwrestling.org) is Sunday 25th August 2019 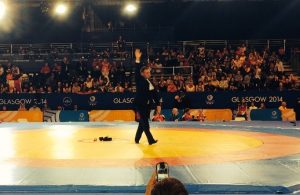 Dave Sudron retiring from international refereeing
at the last match of Glasgow 2014 Commonwealth Games,
leaving his shoes on the mat following time-honoured tradition