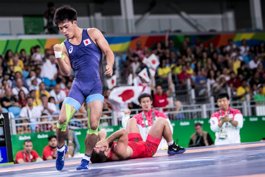 United World Wrestling and the Olympic Channel have begun providing wrestling fans with year-round access to every match from the Olympic Games Rio 2016 on the governing body’s official website.

The availability of the matches, which are made possible through the Olympic Channel video player on the United World Wrestling website, provides millions of sports fans around the world with the opportunity to relive the action from Rio.

“The Olympic Channel gives our fans the content they want to watch,” said United World Wrestling President Nenad Lalovic. “Our fans are some of the most passionate in the world. They asked for this access and we are now able to provide it for them.”

To watch the full catalogue of wrestling videos from the Olympic Games Rio 2016, please visit: www.unitedworldwrestling.org/rio2016 and click the “Results/ Videos” tab.

Wrestling has had a presence on the Olympic Channel since its launch in August 2016 with its own dedicated sports page.

The Olympic Channel is a ground-breaking global platform where fans can experience the power of sport and the excitement of the Olympic Games all year round, and is available worldwide via mobile apps for Android and iOS devices and at olympicchannel.com