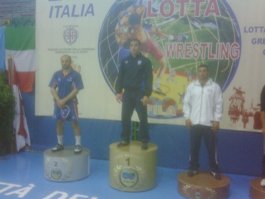 Scotland’s wrestlers gain medals in Sassari, as do Northern Ireland and England.  Scotland came away with 2 Golds,  4 Silvers and 1 Bronze medals.  These seven medals propelled their team to 3rd out of the 22 countries competing.

Hot on the heels of his recent Commonwealth selection to represent Northern Ireland, Mark Montgomery achieved a Silver medal, the first ever FILA tournament medal by a “home grown” athlete from Northern Ireland.

Salman Malitsaev completed the Home Nation haul with a Silver for England.

Shaun Morley (Performance Director) said ‘Overall this was an excellent result for some of our athletes with notable performances from Viorel Etko, Sean Keogh and Salman Malitsaev.  All wrestled well and their performances will certainly give them confidence as they work towards the Commonwealth Games later this year.’