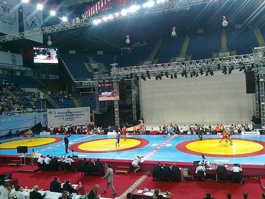 First off for GBR in this year’s Senior World Championships was Myroslav Dykun, in Greco-Roman 66kg.

Myroslav’s was a very close match with him taking the lead over Edgaras Venckaitis of Lithuania in the first round.  The second round was no pushover by Venckaitis as Myroslav was winning 1-0 when he made an error which meant that the Lithuanian could take the advantage and score 3 points.  The third round was also close, with Venckaitis achieving the vital point.

Two of our young athletes gained their first experience to a senior World Championship on Saturday when Craig McKenna competed in the 55kg Freestyle tournament and Sarah Jones competed in the 67kg female weight class.

Craig came up against a strong Namibian opponent in his first round match but wrestled well scoring in both rounds but eventually lost his match to Naatele Shilmele by 7 -3 and 3-2. Craig will gain a great deal from this experience and exposure to these World Championships.

Sarah was drawn against a tough Japanese opponent in her first round match. Sarah fought hard to penetrate the defences of her opponent but unfortunately was unable to do so and evetually lost the match to Yoshiko Inoue by 2-0 and 2-0.

Both Craig and Sarah will have gained a great deal from their exposure to a senior World Championships and hopefully will build on this experience for the future.