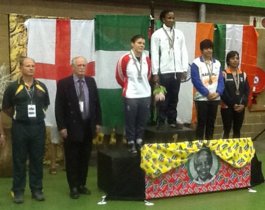 Olga Butkevych, member of British Wrestling’s World Class Performance Programme in the run up to the London 2012 Olympics and GBR Wrestling’s first female Olympian ever, today achieved 63kg Silver for England at the Commonwealth Championships. 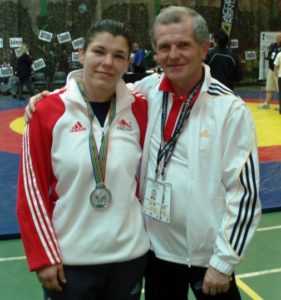 Olga, recently returned to Wrestling, put in a good performance but was overcome by Nigerian Oborodudu Blessing in the final.
Olga is pictured here with her coach, Anatolii Kharytoniuk the England National Coach

In contrast to the Men’s Freestyle at the Commonwealth Championships in which all Golds were taken by India, Female Wrestling shared the first places between Nigeria (4), India (2) and Canada (1).  With Olga’s feat, England narrowly missed its place in this list.

Of Silvers, these were again taken by India (4) and Nigeria (2) with only Olga and England breaking the mold.

In the Bronze categories it was a similar story, this time with Fiona’s Scotland alongside India (5) and one Bronze each for South Africa and New Zealand.

Organised by the South African Wrestling Federation, wrestlers attended from across the Commonwealth, which comprises of 54 Nations, with an estimated population of 2.245 billion, almost a third of the world population.

The Championships have been held on regular bi-annual basis since 1985. This is the second time that the South African Wrestling Federation is hosting this event, the last time was in 2005 in Cape Town. This year’s Championship is especially poignant with the sad death of South Africa’s historic leader Nelson Mandella.