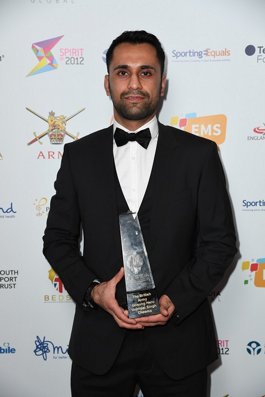 Inderpal’s tireless dedication and support of ethnic minorities saw him beat two strong contenders in his category, winning the award which acknowledges special people in the community, who have had a positive impact on bringing local communities together through sport or physical activity.

Inderpal, who works at the Singh Sabah Slough Sports Centre, coaches low participation ethnic minorities in Olympic freestyle wrestling, having started wrestling himself in 1993 at the tender age of seven.

He has been coaching youth at the freestyle wrestling club for over eight years on a completely voluntary basis. In this time, the dedicated wrestler has increased the club’s size from 15-20 people to 30-40 students, coaching British Indians, Pakistanis, Bulgarians, Polish and Afghan youngsters at the club.

Inderpal has also been instrumental in producing three British junior champions, including Ranvir Singh.
His dedication and hard work enabled him to win an award at this year’s Lycamobile BEDSAs organised by Sporting Equals, who are the expert partner of Sport England and advisors to the Department of Culture, Media and Sport.

On winning the award, Inderpal said, “I am extremely grateful to have received this award and would like to thank everyone who voted for me. I hope this can inspire others to give up their time to help develop others.

“I would also like to thanks my family, friends and everyone associated with Slough Wrestling Club for helping me to get to this position.”

I would like to thank BEDSA, Sporting Equals and other organisers for creating such an event that recognises the great achievements and work been done in the black and ethnic minority communities.”