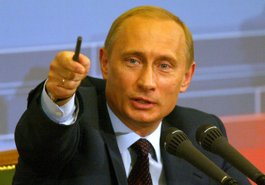 Russian President Vladimir Putin and Nenad Lalovic, President of the International Wrestling Federation (FILA), met in Sochi Tuesday and discussed the further development of the sport of wrestling and the sport keeping a place in the Olympic Games program.

“It is hard to imagine the Olympic program without wrestling and athletics,” said President Putin.

“These sports are very significant for the Olympic movement as well as Mozart and Tchaikovsky for music,” he said.

“I remember well a few years ago I took part in wrestler’s training, and what exciting tricks they demonstrated in freestyle and Greco-Roman style. Wrestling is an amazing show, but it is necessary to promote it properly on television and use modern PR tools and techniques,” he said.

“Wrestling’s position should be strengthened,” he stated.

It was awarded for a decisive contribution to the “Save Olympic Wrestling” programme.
“Complex reforms that allowed wrestling to keep a place in the Olympic family, was carried out in the shortest possible time,” said Lalovic. “Without the decisive support of Russia, and personally Vladimir Putin, these changes would have been impossible.”