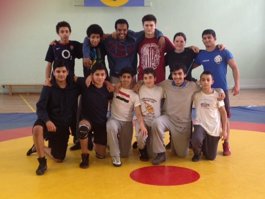 The training was led by Eric Ciake, Regional Coach of the Southern Region and the England Talent Pathway Lead.

Eric took the wrestlers through some of the GB wrestling physical testing protocols as well as techniques from the Orange Technical award.

All clubs should have a qualified Referee on their books.  A club-based Referee is a huge asset allowing for up-to-date interpretation of the latest rules and enhances the chances of a club’s athletes.

The course saw coaches from Brondesbury, Legion, Kensington and Tokei and as far off as France referee matches between the athletes under the new 2014 FILA rules as part of their training.

There was also a visit from a FILA Level 2 referee from Croatia. So overall a great day.