Star-turn Leon in the news 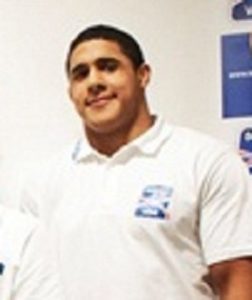 Forty-seven Team 2012 athletes, representing each of the Olympic and Paralympic sports and disciplines, gathered this week in London to hear guidance and advice from sporting legends such as Sir Clive Woodward and Baroness Grey-Thompson.

The Athlete Summit event, organised by Team 2012 presented by Visa, provided aspiring young athletes from across the country with vital skills that will assist them on their journey as they prepare to compete in their first Games in less than two years’ time.

More on this story can be found on the Team 2012 website at the link below.
Launched in September 2009, the Team 2012 fundraising initiative, presented by VISA, is already over half way towards its fundraising target of £25million with the monies raised being invested back into sport.

For the Wrestling World Class Performance Programme, Team 2012 private-sector funding has made all the difference as it was the trigger that doubled the initial “Basic Funding” made over to Wrestling by UK Sport from government/Lottery funds in 2009.

Initial funding was 25% of the amount given during the Beijing Olympic cycle and was this amount was doubled-up due to Team 2012, leaving Wrestling with 50% of the Beijing cycle, just enough to manage a basic programme.

Government/Lottery/Team 2012 funding, all dispersed through one process by UK Sport, is strictly ring-fenced and must be spent solely on the World Class Performance Programme in support of wrestlers capable of creditable performance in London 2012.  (i.e. no wrestlers of world class standing = no funding).

At the December 2010 UK Sport Board meeting, the decision was taken to continue with the current level of funding to the Wrestling World Class Programme.  Of 47 sports, funding was put up for six, down for two and the rest remained unchanged.