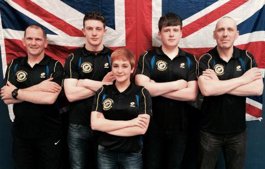 On Sunday past a team from the Northern Ireland Wrestling Association tried their hand at cross-training and embraced the challenge of Sambo Wrestling.

Four athletes entered the British Championships being hosted in the Judo Centre, High Wycombe by the British Sambo Federation and the results were impressive with a return of two Gold medals and two 4th place finishes.

Sambo is both a martial art and a combat sport and the word “Sambo” is an acronym for SAMozashchita Bez Oruzhiya which literally translates as “self-defence without weapons.”

Sambo is relatively modern since its development began in the early 1920s by the Soviet Red Army to improve their hand-to-hand combat abilities.

Interim Chairman of the BWA, Barry Pollin accompanied the team and stated, “The event was a thoroughly enjoyable day and the skill levels of the athletes was impressive. We made many new friends and we were very happy that with a little adjustment our athletes were able to compete and even win matches. In my opinion, the Olympic styles have little to fear from other forms of wrestling and it’s both interesting, educational and the study other forms and disciplines enriches our own.