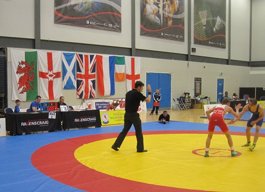 The event, now a popular fixture in the calendar, took place at the Ravenscraig Regional Sports Facility which is a public leisure centre, located in the Ravenscraig area of Motherwell, North Lanarkshire, Scotland.

Wrestlers came from across Scotland, but also England, Northern Ireland, Republic of Ireland and Holland.  There was also vital support for the event from Referees, Timekeepers and other officials, some of whom travelled great distances. 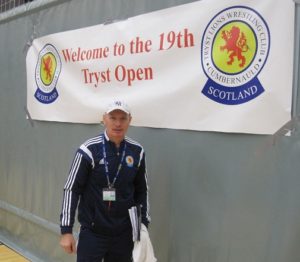 The event was hosted by Tryst Wrestling Club, their lead coach Steven McKeown and his team with their customary efficiency.

Said Steven, “I was very pleased to see our new breed of Tryst grassroots wrestlers put on a great show. We are already looking forward to our 20th edition next year which will be the biggest and best yet!”

Steven continued, ”Special thanks to Competition Director Alan Airlie who worked tirelessly around the clock with myself in planning the event – together we are able to make the Tryst Open one of the showpiece events of the annual wresting calendar”

The British Wrestling Association assisted with pairing and the event was attended by BWA Chief Executive, Colin Nicholson, who said, “British Wrestling is only too pleased to go the extra mile to assist Scottish Clubs in laying on quality wrestling events for the athletes.  It is by working together that we will grow our small sport into a force to be reckoned with.”

Results are available on the British Wrestling Results pages (link)