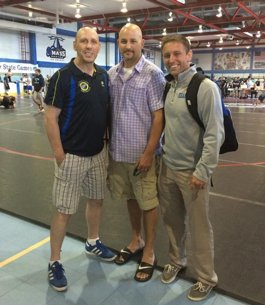 The party travelled out during July and have a varied programme of training, competition and, of course, seeing some of the famous sites.

This NIWA tour solidifies the International Good Will Program set up by Burlington Wrestling, another partner. Over the past 6 months, the organization has been working with Kevin Noke from Burlington Wrestling to create opportunities to broadening their programme’s reach beyond the wrestling mat.

In addition, the newly appointed NIWA Pathway Officer, Jim Toland, was able to combine a pre-arranged trip with this event and attended the Roger Williams University wrestling camp in Bristol, Rhode Island.

Ben Pollin from the National Talent Squad was also invited to train with one of the USA’s top clubs, the Doughboy Wrestling Club (link to website) by Bill Soda, one to their influential administrators.

Pictured are Barry Pollin, John Egan (Head Wrestling Coach of the Roger Williams University Team) and Kevin Noke (a Programme Manager within the Burlington Wrestling programme) at the Bay State Games, University of Massachusetts, Boston on Saturday 11th July where they consolidated arrangements for the 2016 Celtic Cup.

Barry, family and colleagues’ arrival marked the official start of Burlington Wrestling’s Good Will Program 2016. Their Good Will Program is currently scheduled for the summer 2016 and will focus on providing wrestling attire to youth and amateur wrestlers in Dublin and Northern Ireland; culminating with Burlington wrestlers competing in the Celtic Cup in the Foyle Arena in July 2016. 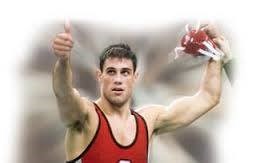 NCAA Champion, Mitch Clark, will head up the technical sessions at the Roger Williams wrestling camp (an action packed four days of wrestling and competing). Mitch was a Division 1 National Champion and the only person in history to tech-fall in the National Finals.