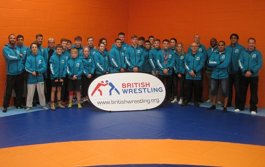 2016 European Junior Bronze medallist George Ramm inspired National Talent Squad members with a talk followed by a question & answer session and passed around his medal. George had just returned from the World Juniors in Macon, France.

Amongst much good advice, George encouraged the athletes to eat and drink the right things, get enough sleep and take every opportunity to train – regardless of club and affiliation. George went on to pay tribute to coach Anatolii Kharytoniuk and many other coaches he had worked with during his globe-trotting programme that took in Ukraine, Germany, Netherlands and Sweden.

Jessica Blaszka, Rio 2016 Olympian and 2015 World Bronze medallist also talked to the squad, answering questions that illustrated her dedication and enjoyment of the sport, her 4-year programme running into her personal highlight of Rio and her commitment to competing at Tokyo 2020.

Earlier in the day all coaches associated with the Talent Pathway had a round-table discussion with British Wrestling Association Chair, Jem Lawson and England Performance and Talent Pathway Lead Eric Ciake.

The coaches committed to continue with the implementation of British Wrestling’s Talent Pathway and Award system and agreed various refinements to the process. Dates will now be set for the next series of Regional Squads. Barry Pollin (Northern Ireland Wrestling Association Chair) and Jim Tolland (Northern Ireland Pathways Officer) also attended and will take back the information gleaned from the discussions to Northern Ireland.

Congratulations are due to the following, who were appointed to coaching roles following an open recruitment process that began on 17th August. Recruitment panels included Jem Lawson, Tony Melling, Eric Ciake, Jesse Bradbury and Colin Nicholson.

Said Jem Lawson, Chair, “These coaches deserve not only our congratulations on their success in the recruitment process but our gratitude as they are busy people who have volunteered for these crucial and time-consuming roles”

To find the PureGym nearest you…