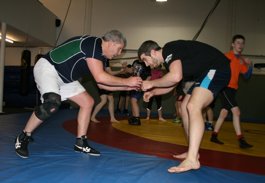 
Cary Depel, new Chair of British Wrestling undertook the visit to Northern Ireland within his first 100 days in office and was straight onto the mat himself (see picture).

Barry Pollin, Director – Chairman, The Northern Ireland Wrestling Association (NIWA) put together a full visit programme for Cary who returned pleased at accomplishing so much in such a short time and as Barry put it in jest, “Sleep is for the weak.” 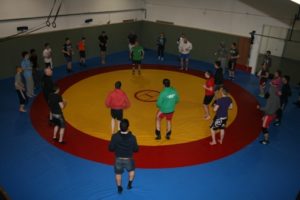 John O’Rawe, NI Talent Development Coach, met Cary off the aircraft at Belfast City Airport on Tuesday 21 January from where he was whisked off to a junior club training session at Evolve Wrestling in Limavady partially delivered (under supervision) by the new NIWA UKCC Level 1 coaches. 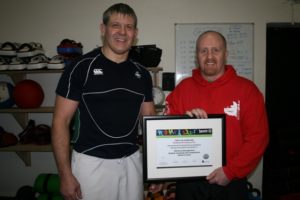 This was followed by a senior club session led by John O’Rawe and Majid Ghazello.

These first packed hours were rounded off at Majid’s own Dananos Restaurant in Londonderry.

Wednesday began with a breakfast meeting with Terry Watt, President of NIWA about furthering the already close cooperation between the NIWA and British Wrestling.

Cary then met with Sport NI and Derry City Council’s Sports Development Dept. Crucially there was a site visit to the “Arena” and accommodation in St. Columb’s Park where the future NIWA Wrestling Academy’s foundations are rising from the ground. This is a landmark cooperation project between Wrestling, Judo and Climbing, with an expected completion date in March 2015.

Later, Michael Cooke (Sport NI) hosted Cary at an Athletes’ Seminar in Campsie since Cary firmly believes in putting athletes at the centre of wrestling during his tenure. “The best days for Northern Ireland and British Wrestling are still ahead of us and with courage, ambition, discipline and dynamis, we can win medals at the XX Commonwealth Games in Glasgow and become what we are meant to be, champions on the mat and in life!” said Cary
Michael Cooke added, “The focus of the athlete seminar was to ensure that positive inspirational messages are transferred to the parents, athletes and coaches.” 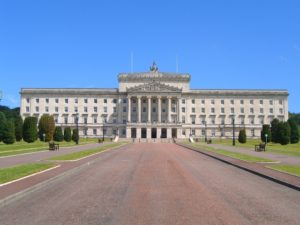 Thursday’s breakfast meeting was with Barry to review progress, followed by a formal Sport NI seminar “Focus On Innovation and Technology” back in Belfast, within the grounds of Stormont Parliament Buildings.

Cary returned to the mainland more knowledgeable and informed about the work of the NIWA and pledged to help grow participation and developing talent in cooperation with Barry, the NIWA Board and coaching team.

Cary has dates in the diary for similar visits to Scotland and Wales and is swiftly making his way around Regional Committees and clubs in England.