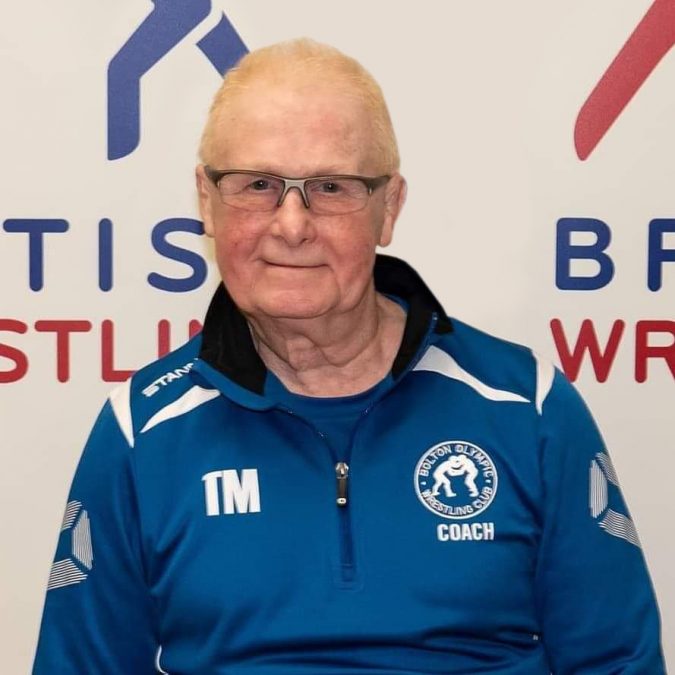 Tony first came to wrestling in 1964 and spent 16 years as a successful competitor. His passion, enthusiasm and dogged determination meant that he naturally became a volunteer coach in 1977, as he transferred his wide range of technical skills to coaching the young people at Bolton Olympic Wrestling Club. He was determined to offer quality coaching to young people all over the North West of England through wrestling. Tony became a trusted and well-respected mentor and he placed BOWC firmly on the map by offering comprehensive training sessions that built up the confidence of young people, giving them an opportunity to improve their physical development and mental well-being; previously shy individuals were transformed into international athletes, through hard work, commitment and support.

Recognising his tenacious nature, energy and drive Tony was tasked with becoming the GMC Coach and started to impact on wrestling in the wider community. From this, he created very successful local squads of wrestlers who admired his skill and level of aspiration. This was followed by the position of the Regional Coach; a position he held for a further 28 years. In 1983 Tony became the National Coach, he continued to find raw talented wrestlers through the program that he devised and created many national and international standard wrestlers from this role. Whilst continuing to coach at Bolton Olympic Wrestling Club he managed the Junior National Team from 1993 to 2003 and created innovative fitness programs that gave the athletes the best opportunity to reach their full potential. Many wrestlers will testify that Tony’s motivation is selfless; to see others perform to the best of their ability and receive a boost to their self-esteem and confidence has been reward enough. Tony inspired all the young people that he came into contact with and they succeeded because of him and his passion for wrestling; his attitude was truly inspirational.

From 1985 onwards Tony travelled on a regular basis with many of his wrestlers as they went on to reach national, European, World and Olympic and Commonwealth medals. Attending 12 World Championships as Coach and Team Manager Tony achieved 4 Gold, 1 Silver and 2 Bronze medals at one World Championship; a feat not emulated by any other coach. Tony led teams of wrestlers to five European Championships and achieved one Gold, one Bronze and two 4th places. At two Senior Commonwealth Championships Tony coached wrestlers to two Gold and three Silver medals. In 1994 Tony was Head Coach of the Commonwealth Games wrestling team in Victoria, Canada. The team had the unprecedented success of four medals in total; three Silver and one Bronze. This medal haul is still the highest standing in English wrestling.

Tony always maintained that to be called a ‘Coach’ you had to have taken a kid off the streets or someone with no previous experience and take them all the way up to become British Champions. This he did himself with his son, Paul. Paul entered his first competition at the age of 8 years and climbed up the ladder to achieve his goal of representing Great Britain at 52 kilos in the 1988 Olympics in Seoul.

Tony has been involved in British Wrestling Association for over 55 years. He is a well-respected and trusted man and has made a difference ensuring wrestling has been always been promoted and that young people have been encouraged to participate readily for their next tournament. In 2005 Tony, Ellen and Paul were included in Bolton’s most iconic sculpture ‘The Spirit of Sport’ which honoured our greatest sporting heroes to mark their contribution to sporting life. In November 2008, Tony was awarded ‘BWA Honorary Life Membership’ in recognition of his outstanding contribution and service to British Wrestling; an honour he was humbled to receive. This was followed by a ‘BWA Honorary Coaching Certificate’ in October 2015, in recognition of the excellent coaching of countless athletes across the years and outstanding services to wrestling. After nomination by Bolton Council, BOSPAA, as part of their ‘Better Lives through Sport and Physical activity’ campaign, Tony was awarded the ‘Unsung Hero in Sport Award’ 2013/14. He has also contributed to wrestling at the Commonwealth Games in 2002 and 2014 and the Olympic Games in 2012, using his vast experience as a Technical Official.

He has worked with Breaking Barriers North West, which is a charity that challenges the barriers to inclusion of disabled children in society. Along with his son, Paul, Tony has been proactive in creating a weekly fitness training session for young people with disabilities. He firmly believed in fairness and equality of opportunity for all.

Tony has coached at Bolton club for 43 years now and in this time he has managed to take local athletes to reach national, international and Commonwealth honours. At the club, Tony adjusted his delivery to suit the ability of the athletes whether they were there to get fit or as competitive athletes getting ready for competitions. He has also mentored six UKCC Level 2 coaches at Bolton to work alongside him.

Over the last 55 years of dedication to wrestling Tony’s influence has extended throughout Bolton, the North West of England, Wales, Scotland and Ireland and on to the worldwide stage. He used his network of high profile contacts to ensure that athletes and coaches were exposed to and participate with equality in European, World, Commonwealth and Olympic wrestling.

Whilst others are giving a similar service to Tony, no one has achieved the medal toll that he has in Junior European and World Championships and Senior Commonwealth Games.

In April 2016 Tony faced a number of personal challenges when diagnosed with Metastatic Prostate Cancer. He had to undergo extensive Chemotherapy, Radiotherapy and Radium 223, but this did not stop him from travelling to competitions, coaching on the mat and coaching at the club. He continued to fulfil his duties as Vice-Chair of Bolton Olympic Wrestling Club and Vice President of the Northern Region Wrestling Association. This demonstrates his determination, his passion and will to succeed. As Head Coach at Bolton, he put his wrestler’s needs and commitments before his own to make sure that the wrestlers continued to get the high-quality training he believes they deserve.

Summary of his Wrestling Life:

‘Wrestling was his Life’

Tony was the loving husband of Ellen, much loved Dad to Paul and Angela and amazing Grandpa of Daniella, Charlotte, Joe, Katie and Molly.