Notification of the death of Tony Shacklady. 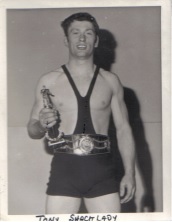 During, his days as a Wrestler and National Team Manager, he passed on his enthusiasm and knowledge of the sport, touching many people’s lives.

Tony was also selected as Team Manager for England, 2002 Commonwealth Games in Manchester, but prior to the start of the Games suffered a severe stroke.

A Celebration of the life of Tony to be held at St. Marks Church, Worsley Brow, Worsley M28 2WH at 10.45am on Wednesday 12th March, followed by Eccles Crematorium, 716 Liverpool Road, Eccles M30 7LW at 12.20pm
The family have let it be known that there will be family flowers only at St Marks and Eccles Crematorium and anyone wishing to make donations should to so to Barton AC (Wrestling Club) via John Lightfoot (j_ightfoot@btinternet.com)
Updated 10th March 2014