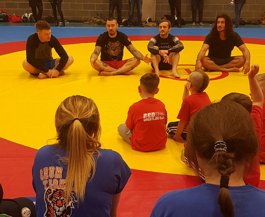 On Saturday 19th November the UFC delivered an action packed show to a full house at the SSE Arena, Belfast.

The event was headlined by Gegard Mousasi who gained a convincing victory over Uriah Hall in a long anticipated rematch.

However, the real entertainment and star quality that evening was provided by the notorious Conor McGregor who was present to support Artem Lobov and Charlie Ward; athletes from his gym in Dublin.

This was a huge event for many local martial artists who train long hours to be the best at their chosen sport and the young wrestlers of Northern Ireland are no different. Thanks to the generosity of the UFC organisation many of the local wrestlers were seated, with complimentary tickets, in Row A, close to the action.

This unique opportunity was provided by the UFC through an ongoing partnership between the company and the British Wrestling Association whereby both organisations have pledged to support and help each other to the benefit Olympic Freestyle wrestling which the UFC consider to be one of the major component parts of the Mixed Martial Arts game.

In addition to Octagonside seats, members of wrestling clubs were also invited to attend a private training session and seminar in Belfast at Redhog Wrestling Club ahead of the event.

Said Barry Pollin, Chair of the Northern Ireland Wrestling Association, “We’ve a lot of volunteers who give freely of their time and young people who put the hours in, it’s not very often we can reward them – but on this occasion (with the UFC’s help) we can.”

Indeed, fresh from his fourth consecutive victory at the British Junior Wrestling Championships in Bolton, Greater Manchester, Ben Pollin was matched against one of Canada’s better fighters Elias “The Spartan” Theodorou for a short contest in front of a peer group of wrestlers.

Others present at the seminar included Paul Felder, Brad Pickett and Dan “The Outlaw” Hardy. Each brought a particular range of skills to the class using their experience to encourage those at the beginning of their sporting journey and supporting the more talented athletes with advice and tips.

The evening was a total success and coaches and wrestlers alike were particularly impressed with the level of enthusiasm and energy displayed by the UFC fighters.

Jim Toland, the Northern Ireland Wrestling Association Pathways Officer said, “I can honestly say this was an ego-free environment. The lads from UFC were excellent, they answered questions from our athletes and told their story in such a way that our guys know that if they apply themselves and work hard the sky’s the limit. I’ve been around and coached many high performers and the guys from the UFC are the real deal.” 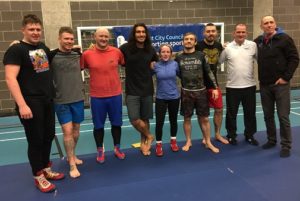 Each of the guest fighters took a small group of 10 people and did some workout routines with them and then switched and moved round the wrestlers. This was followed by a Q and A session giving the young wrestlers the opportunity to ask the fighters any questions and finally there was a photo/autograph session.

Each of the guest fighters took a small group of 10 people and did some workout routines with them and then switched and moved round the wrestlers. This was followed by a Q and A session giving the young wrestlers the opportunity to ask the fighters any questions and finally there was a photo/autograph session.

Olympic Freestyle Wrestling is a safe sport; it provides many of the thrills and spills of the style of Mixed Martial Arts delivered by the UFC but without the strikes.

All the coaches present have UK Coaching Certificate accreditation and speaking on behalf of the Northern Ireland Wrestling Association, Tom Hardy said, ” I’m very happy to have this ongoing partnership with the UFC.  Over the past weekend they’ve demonstrated a willingness to help with the development of grassroots sport, which is a far cry from their regular business. We value their assistance and now we’ve to return to our own business and we’ve athletes to prepare for higher level competition including the European Cadet Championships in Bosnia, next July.”

The next overseas tournament attended by the Northern Ireland Wrestling Association will be the Malta Open on 3 December when perhaps some of the technical ability will shine through.