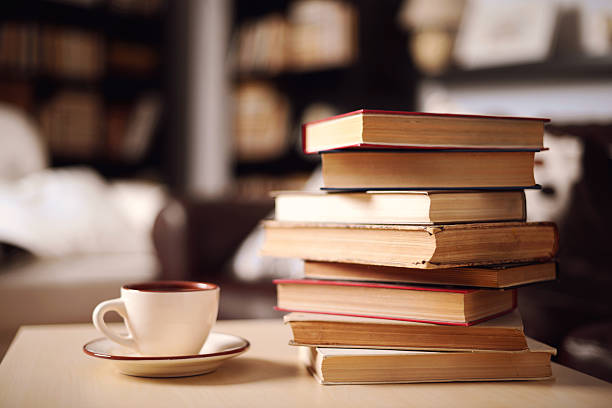 stack of books in home interior

A Book review by Trevor Hill

Last year during the lockdown, I reviewed several Young Adult books which dealt with wrestling. Since then, I have read a few more and thought both young wrestlers and their parents might be interested in checking them out, in addition, I’m throwing one in for the grown-ups so they don’t get the idea I’m neglecting them.

The three books I’m going to review are all very different but have quite a few things in common, not least our favourite sport. Like the ones I reviewed previously (Terry Davis’s Vision Quest, Jerry Spinelli’s There’s a Girl in My Hammerlock, Alfred C. Martino’s Pinned and Perfected by Girls, Chris Crutcher’s Athletic Shorts and Sharon G. Flake’s Pinned) the books are all from the USA and deal with school/collegiate wrestling (C’mon guys, when is someone going to write a book about British wrestlers?). Still, British readers will no doubt find them enjoyable and informative.

Another thing all the books in this review share is the matter of growing up and making life choices, especially concerning wrestling (or sports generally) and relationships.

Wrestling Sturbridge (1996) by Rich Wallace is about Benny and his three friends who are high-school wrestling champions. They live in a town which seems like something from a Bruce Springsteen song (“Who?” Go ask your parents!) where “they bring you up to do like your daddy done[i].” Boys wrestle and become men who used to wrestle and work at the local factory. For many of them, winning a major competition is the biggest thing they’ll do. Benny wants to win the state championships and this year is his last chance. The problem is that his coach has decided to focus on his three friends, Al, Digit and Hatcher, reckoning they have the best chance to win. As Al is in Benny’s weight class, their rivalry grows and the once solid friendship begins to suffer. As well as this, Benny has to come to terms with the knowledge his wrestling career will one day come to an end, especially as he hasn’t applied to college. He is helped in his soul-searching by his smart, athletic girlfriend Kim (she’s a runner), a solid female character amongst all the male muscle. 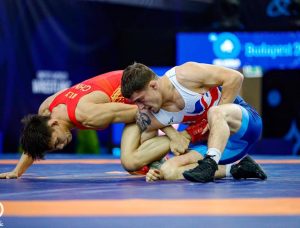 Wrestling Sturbridge has a great atmosphere and, despite the potentially depressing scenario, it is pretty uplifting and a very easy, enjoyable read. The descriptions of the town, its obsession with wrestling and the lack of opportunities for young people will probably feel familiar to some older readers and younger readers will get a glimpse of the not too distant past when we had no mobile phones, computer games or Netflix.

Rich Wallace has written a number of sports-based novels and, along with his wife Sandra, several inspiring books about social issues in US:  http://richwallacebooks.com/books/

Takedown by Laura Shovan (2018) is probably one of the most important books about wrestling at the moment and deserves a wide readership. Shovan is a former “wrestling mom” whose son wrestled from 7-14., so this is the area she writes about. The main characters of the book are tween wrestlers Mikayla (Mickey) and Lev. Lev is a successful member of the school team but is also interested in writing and poetry; Mickey is also a very good wrestler who joins the same club as Lev because she is refused  membership of the team her brothers trained in… because she’s a girl! To make matters worse, her best friend decides to drop wrestling to go and do more “girly” things, like dancing. As such, the book shows the problems some young athletes have making choices between friendships and sporting passions.

Like other books with the “only girl in the team” theme, such as There’s a Girl in my Hammerlock or Perfected by Girls, the story explores the frustrations and problems caused by sexist attitudes within the sport but uses the clever device of having two narrators, Mickey and Lev. In this way we see the different thoughts and changes in attitudes between the characters. Lev, initially unsure about wrestling with a girl, slowly becomes Mickey’s friend as well as her biggest fan and ally. In the meantime, he finds himself facing some of the darker sides of the sport which begin to make him question his relationship with it.

The reason this book is so important is that, like Alfred C. Martino’s Perfected by Girls, it is about a time when female wrestling  is a rising and established sport, something especially important in the days of This Girl can Wrestle. Laura Shovan commented on this when I wrote to her recently, 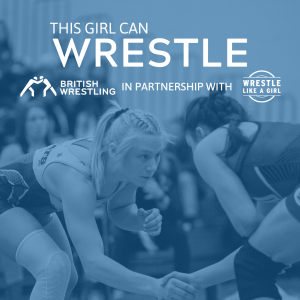 In Maryland, at least, girls in the sport have a strong network of support. It comes from the youth organization, as well as foundations such as Wrestle Like a Girl that run camps and clinics specifically for girls. Helen Maroulis’s influence as a role model is also important [the first US Olympic gold medallist in women’s wrestling]. With all these pieces in place, women’s wrestling has become one of the fastest growing sports in the U.S. over the past several years. It recently won NCAA (college sports) emerging sport status.

The book shows Mickey not only taking part in mixed matches but finding out about the wider world of girls’ wrestling and girls-only competition. Takedown is special in that it shows younger girls (and boys) actively engaging in the sport and the fun of just training and competing whilst not having to worry about “romance”, “girlfriends” and “boyfriends” etc (they get in the way of training, let’s face it!) and the widening acceptance of girls being able to do whatever sport they want.

As I mentioned above, Lev has dreams of being a writer and often wonders about his two passions. Perhaps he should read The Imaginary Girlfriend by John Irving (1996)- he’s a bit young to be reading Irving’s novels.

Irving writes adult fiction and some of his books have been made into successful films, such as The World According to Garp and The Cider House Rules. Many of Irving’s heroes are wrestlers, which isn’t surprising as he wrestled and coached for over forty years,  training with Dan Gable at one stage. This book is his autobiography and combines stories of his wrestling career and his development as a writer. It is a touching work which I think many adults, especially parents, will find relevant. The title comes from an excuse Irving once made to get out of training sessions  by pretending he had a girlfriend. For those who haven’t read his novels, I recommend them very much and might even review them some day.

(Thanks to my friend Houchang Chehabi for sending me Takedown and several other novels from his basement clearout).

[i] Bruce Springsteen ‘The River’ (check it out on Youtube)