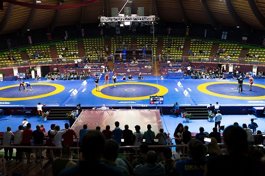 United World Wrestling held a meeting of its bureau last month during the Junior European Championships in Rome.

The bureau discussed several topics around the operation of United World Wrestling including participation in championships, late registrations, obligations of team leaders, obligations of inspectors and updated World Cup regulations.

The members also passed a stricter enforcement of the ‘pushout’ rule to promote the use of technical actions on the edge of the competition surface.

Below is a summary of what was discussed around each topic.

These rules will be implemented on 1st September2018.