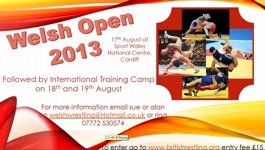 Information regarding the international wrestling training camp (18th and 19th August 2013) in Wales, following the Welsh Open on 17th August is below and accessible via the link.

All Club Coaches are welcomed as we learn off one another for the future of British Wrestling.
The spirit of Wrestling across the nations has been strengthened by the campaign for wrestling to gain re-acceptance by the International Olympic Family.

International cooperation was enhanced during the recent competition at Ancient Olympia in Greece where Alan Jones, Head of Performance, Weslsh Wrestling, made contacts with many wrestling nations who declared their wish to compete and train in Wales and Great Britain.