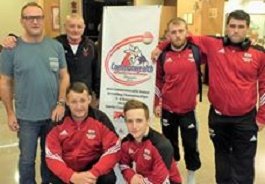 Alan Jones MBE, National Coach for Wales, took a team of four to the Commonwealth Senior Championships in Singapore from the 2nd – 7th November.

The aim was to give his wrestlers some international experience to prepare them for the year ahead and towards the build-up for the Commonwealth Games in Gold Coast 2018.

Alan was very pleased with the performance of his wrestlers, who did Wales proud.

First to take to the mat on Day One was Ken Harris in the under 97kg weight group. This was Ken’s first international competition outside the United Kingdom. So he was open-minded and ready to gain as much experience as possible.

Ken’s first match was against a very experienced Indian wrestler – Ken was overwhelmed, losing on point’s superiority. The Indian then went on to the finals which brought Ken back into the repecharge, where Ken won his next match to put him in the fight for bronze.

Ken just missed out on a medal gaining 5th place. Alan was pleased with Ken’s determination and commitment. 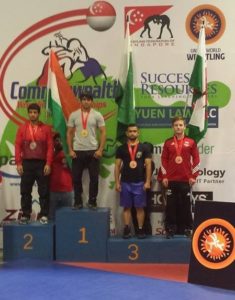 Day Two brought some more exciting action with Iwan Baker fighting under 61kg.  Iwan won his first fight against a good Singapore wrestler which put him in a strong medal position. He had some hard fights against some tough opponents which included a top Indian wrestler. Iwan then seized the opportunity to represent his country at senior level and fought his way through to win a bronze medal.
This was a fantastic result for him and for Welsh Wrestling. Alan was very pleased with his performance. 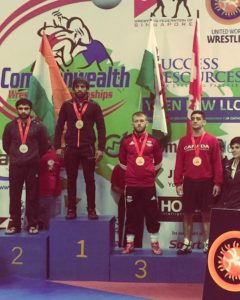 Next was Kane Charig under 65kg. Kane has been building on his experience and is going from strength to strength. Kane had 3 wins against some high class wrestlers from Singapore, Australia and Pakistan which took him through to the semi-finals where he was fighting against a well-seasoned wrestler from India for a position in the final.

Kane went on to fight for, and win, Bronze Medal against Australia. Alan would like to thank Amir from Legion, and Sport Wales for all their support with Kane’s preparation for this event, which gave Kane a great result.

Then Oliver Cole, under 86kg, was in a hard pool of four with Pakistan, Canada and India. Oli had some hard-fought fights against some experienced wrestlers – unfortunately Oli got injured and was unable to continue. Alan was disappointed for Oli as he had been working hard towards this event, so to be injured at the end was a major disappointment. 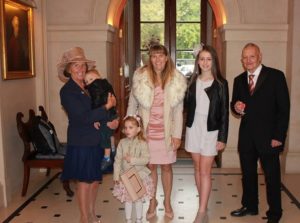 Alan at his MBE investiture Oct 2017

Alan said, “This event was great preparation for our wrestlers towards the Commonwealth Games in 2018. I am very pleased and proud to be with the team and that they all performed well in this top international event. I have always used the Commonwealth Championships as a booster for our team, to help them appreciate what’s needed for the forthcoming Games. Now we can prepare with the knowledge that’s it is a realistic target not a dream.”

Ian said, ‘I am very proud of the team performance. Although the team is young and still gaining international experience, they performed really well against some very tough opposition, including strong teams from India and Canada. It was great that Wales was once again represented in these championships, and we showed that Welsh Wrestling continues to go from strength to strength” 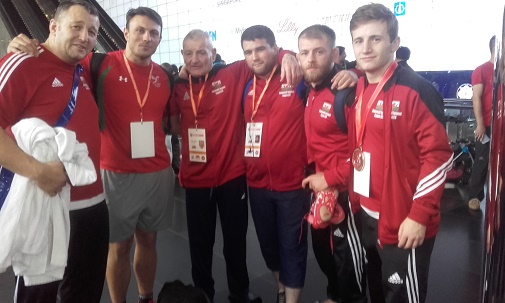