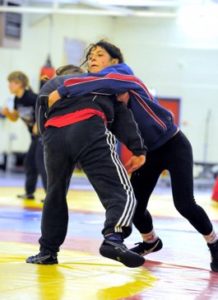 Yana Rattigan and Olga Butkevych, training partners in the British Wrestling World Class Programme, have achieved bronze medals for GB in one of the toughest tournaments in the World. And there was a bronze too for a GB Greco Roman wrestler at a tournament in France.

Yana and Olga achieved their bronze medals at a Golden Grand Prix tournament in Krasnoyarsk, Russia, where all the world’s best wrestlers are eligible to compete, and the line-up included competitors from many of of the established and successful nations, such as the USA and Bulgaria.

But, while the leading nations failed to win any medals, (and the USA had 12 athletes and achieved just one Bronze,) the GB duo served further notice of the sport’s continued progress in the UK, with two podium finishes in Freestyle. 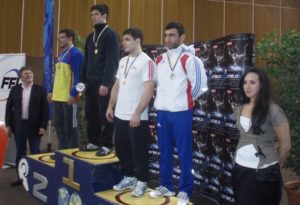 In France, meanwhile, GB’s  Myroslav Dykun, competed in a world class Greco Roman event and came away with a creditable bronze.

After losing narrowly to last year’s Roumanian European Championship silver medallist in his opening match, he won all of his remaining matches, to take a creditable third place – beating an opponent who finished fifth at the World Championships, in the process.

Said Performance Director Shaun Morley, “This was an excellent start to the new competitive year and we hope we can build on this success during the forthcoming year.”