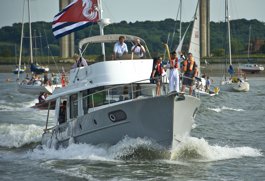 Wrestlers from across the United Kingdom have been holding the torch up high.

At the last count, eleven former and current wrestlers have taken part as torchbearers.  They came from all aspects of wrestling and many parts of the UK, including in Northern Ireland.

The wrestlers made the most of their “Moment to Shine” as they bore the torch on its way to the London 2012 Olympic Games.

Wrestling’s Olympic competition hopes lie with Olga Butkevych who is selected for Team GB in the 55kg class. Olga will wrestle on 9th August at the ExCel Arena. 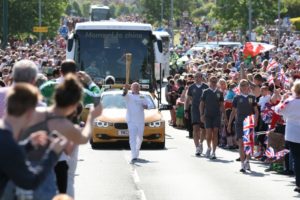 Brian Aspen MBE comes from a wrestling background – his father, Albert Aspen took part in four Olympic Games, two as a competitor and two as a coach
In 1974 Brian won the World Schoolboy Championships defeating the legendary Dave Schultz (USA) in the final.

Brian was awarded the MBE in 2001 for his services to wrestling. 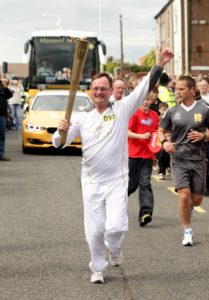 Dave Sudron’s commitment to wrestling is second to none.

By teaching wrestling to local kids he is providing a real service to the community: keeping kids out of mischief and teaching them how to play fair and follow rules, in the process giving them greater self-confidence.

A national wrestling referee since 1984 (and international since 1991,) Dave has recently achieved Olympic Level FILA Referee status and will be refereeing at London 2012 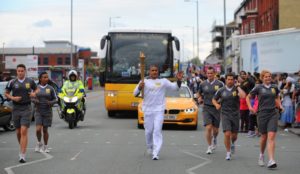 Leon narrowly missed the selection criteria that would have allowed him selection to Team GB at London 2012.

With his positive, approachable attitude, respect for the opposition and officials and his top 12 finishes in the last three European Continental Championships, with highest place 7th, as well as an 11th place in the 2009 World Championships, Leon is an inspiration to the next generation of young wrestlers. 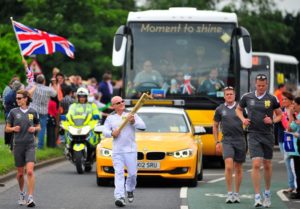 Since 1996 Trevor Hoskins has been coach, fundraiser and organiser at his local club at Middleton & Wirksworth.

He later took on the role of running the British Wrestling membership database, development of new clubs throughout the Midlands Region and offering his organisational skills to the veterans of wrestling to compete in the World Veteran Championships.

More recently Trevor has developed his coaching expertise to that of a 1st4sport tutor and assessor for wrestling and has been the lead coach developing the UK Coaching Certificate Level 1 course. 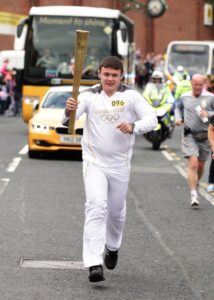 Thomas Denham, a five times British champion, was selected because of his commitment and dedication to his sport of wrestling and inspiring more people in his community to take up sport through the wrestling seminars he runs. 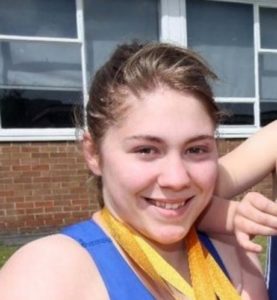 Lisa Cardwell has a background in judo, becoming the youngest ever female black belt in Northern Ireland as well as becoming a silver medallist in the Commonwealth Championships in 2006.

Lisa turned her hand to wrestling and was selected for the Northern Ireland Talent Squad and GB National Talent Squad. 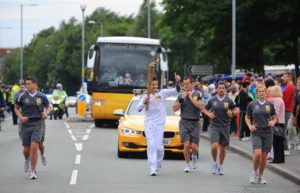 Daniel Panczyszyn, who has won the British Junior Championship 4 times in a row, was selected because of his commitment and dedication to his sport of wrestling and inspiring his peers through setting up a Wrestling Club in his school to increase attendance at extracurricular activities and promote Wrestling in his community. 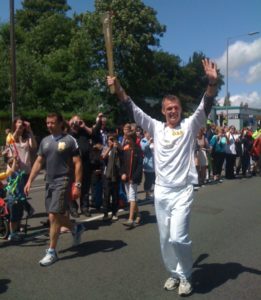 Shaun has served wrestling for a number of years, both as a competitor and manager and led the England Team at the last Commonwealth Games in Delhi. 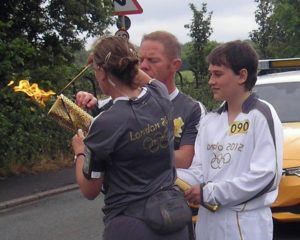 Ben Johnson and Roy Wood from Aspull Wrestling Club both carried the Torch on in Abram. Ben started the Abram leg, passing the Flame to another 16 yr old who then handed the Flame over to Roy.

After the relay Ben and Roy held a celebration party at Aspull Wrestling Club for all the club friends and family. 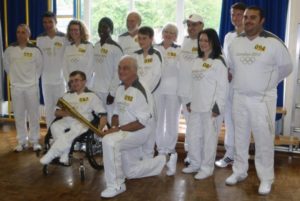 Ranvir Sandhu is a member of the GB National Talent Squad. He always tries to excel to be the best. His training regime is stringent, and he is disciplined.
He sticks to his training plan of Jogging, sprinting, and wrestling. He carried the torch along the Ipswich waterfront, arriving by boat on the River Orwell from Felixstowe and then running past thousands of supporters! 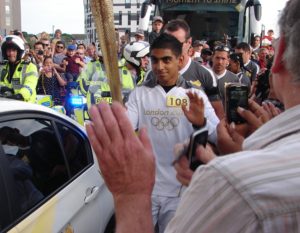 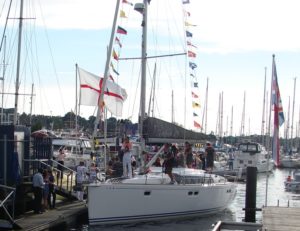 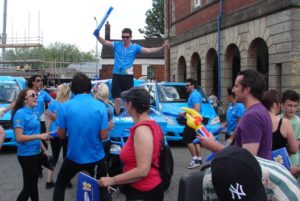 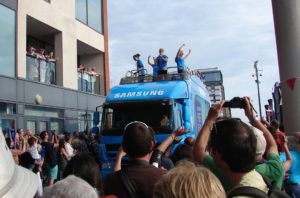 The warm-up crews got everybody well motivated! 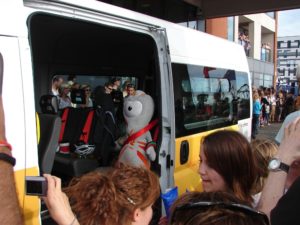 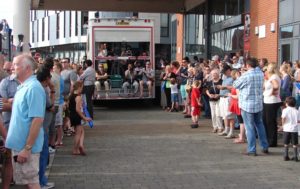 Ranvir’s view ahead at the press van! 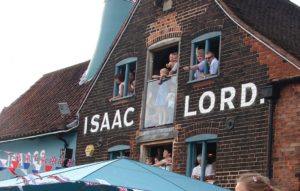 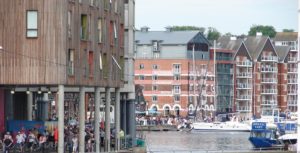