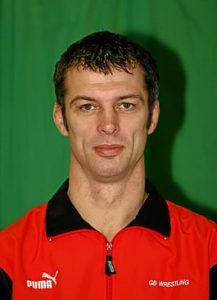 Shaun Morley will lead England’s wrestling squad at next year’s Commonwealth Games. Morley, a former world top ten ranked wrestler in the 1990s, has more recently been a leading referee, coach, and Performance Director of Wrestling GB. He was team leader of British wrestlers at last year’s Beijing Olympic Games.

He beat two other candidates for the role of Team Manager, Wrestling, in Delhi next year, and said: “This is a wonderful honour, and I am very proud to be handed this opportunity. There are some great young wrestlers coming through the ranks, so competition for places will be strong, and that will in turn help raise the standards to new levels. I really do think we have a great chance of being medal competitive out in India.”

Colin Nicholson, the interim chief executive of Wrestling GB, said Morley’s enthusiasm, passion for the sport, and dedication over many years, makes him the perfect choice. “Shaun makes an outstanding contribution to wrestling in Britain, and it is thanks to his hard work that the sport is really starting to gain some  momentum in this country.

“He is very highly respected in the wrestling community, and by the wrestlers, and he will make an outstanding England Team Manager in the build up to the Commonwealth Games, and when he is out with the squad in Delhi next year.”