Wrestling with the Lockdown? 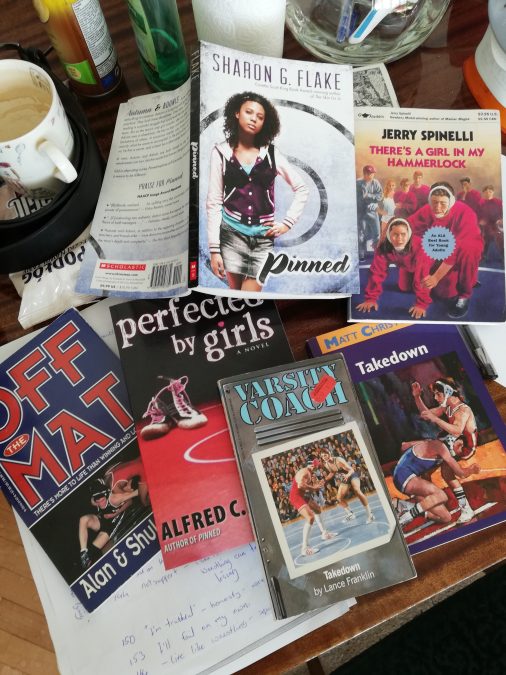 A Book Review by Trev Hill

“We are certainly living in interesting times and I hope everyone is doing OK and you’re not finding the lockdown too much of a strain.  However, I can imagine a lot of you are missing your training; diving onto YouTube to check out instructional vids or re-runs of old matches, but how about those of you who are more into reading? What kind of books are there about wrestling which could be fun to read? I’m not talking about training manuals; I’m talking about novels. Yes, novels! Recently a friend of mine cleaned out his garage and asked me if I would be interested in some wrestling novels. A few weeks later half a dozen ended up on my doorstep.

It might come as a surprise to find there are some pretty cool books about wrestling, particularly for teens and young adults (and a few for the older readers too), so I thought we could have a look at a few and see what’s worth looking at.

Most of the books I have found for young adults (YA) and teens are by American writers, which probably isn’t surprising when you think that wrestling has been part of the US education system for around a century at least. Forty nine out of fifty states sanction wrestling as a school sport and there are hundreds of clubs and big competitions in high schools and colleges. It is a bit of a no brainer that with so many young wrestlers, there would be a market for books. As well as this, with girls’ wrestling being one of the fastest growing sports in US, some of the novels even have female wrestlers as the main characters. I’ll be looking particularly at some of these books.

Vision Quest is a bit of a classic in YA wrestling literature. It first came out in 1979 and was endorsed by the famous writer John Irving (who also writes a lot about wrestling in his novels, being involved in the sport over 50 years). The writer, Terry Davis, wrestled himself for a number of years. Vision Quest was later made into a film (1989) with Matthew Modine (who plays Dr Brenner in Stranger Things). The book follows the life of Louden Swain, a high school wrestler, as he prepares for his final, most important match before he leaves school. The depiction of wrestling is gritty, with some detailed descriptions of training and life in and outside the gym (including the problems of cutting weight). Although the book is classed as YA, it has some adult content although the film is aimed at a younger audience.

Chris Crutcher has written a few prize-winning books, often involving sport. Although he was a high school swimmer, he knew a lot of wrestlers (including his good friend Terry Davis) and included two stories about wrestling in this collection of short stories. One of them, The Pin, has a successful school wrestler challenging his stern, aggressive father (an ex wrestling champ) to a match before the whole school. The second involves a young wrestler being nominated to compete against a fearsome opponent who he knows he can’t beat, but there’s a twist in the tale.

There’s a Girl in My Hammerlock by Jerry Spinelli

Jerry Spinelli is a well-known writer of teen-fiction, such as Stargirl (recently made into a film) but he’s also a long-time wrestling fan. In this book, written in 1991, has a girl called Maisie join her school wrestling team to try and get noticed by a guy she fancies. There are, however, other problems: she knows nothing about wrestling (except from WWE-style shows on TV) and there no other girls in the team, or in the state. Maisie faces a lot of resistance and sexism from other wrestlers and insults from the kids at school. Even worse (perhaps) is that some of the boys in other teams refuse to wrestle with her in tournaments. She must prove herself to the boys in her own team and the people in her town. Apparently, this was not unknown in US at the time, before girls’ leagues became more popular. The story has a lot of humour and some great descriptions of Maisie’s training and competing. Maisie is about 13 in the book, so the material is suitable for younger readers and even boys!

Pinned is about two wrestlers, Ivan and Bobby who are preparing to meet on the mat in an important competition. The story moves between both wrestlers, being told in their own words in each chapter. The sporting descriptions are detailed and the action is great. Which one will win and which one will you be cheering for?

Perfected by Girls, as you’ll probably guess, is about another girl wrestler, 15-year-old Mel is the only female member of the school team and the younger sister of the team captain. Although she isn’t a champion, she’s pretty serious with her training and competition. However, she has several problems; her grandmother wants her to work at her company during the holidays, her parents don’t approve of her 17 year old boyfriend and a misquoted article by a reporter creates tensions between Mel, her coach and team-mates.

Like Pinned, the action and training are graphic. If you want to read about getting your face slammed into the mat just before a date (lots of make-up), this is definitely your kind of book.  Being written since female wrestling entered the Olympics it has a greater focus on female wrestling (although Mel only competes against boys), with Mel attending an all female wrestling seminar and hanging out with other girl wrestlers. Alfred Martino coached girls for over ten years and did his research,

What I learned in my interviews, which surprised me to a certain extent, was that girls who were involved in the sport loved it every bit as boy wrestlers did. They spoke “like wrestlers.” So, as I was writing the novel, it became more about how a teenage girl thinks and feel and act away from wrestling, and how does she deal with wrestling off the mat.

Don’t worry lads, it’s a pretty good book (you can always say you’re buying it for your sister).

Although it has a similar title to the book I just mentioned, Sharon G. Flake’s book is very different. Ms Flake is an African American writer who often writes about Black teens, her most well-known being The Skin I’m In (1998). That said, this is not really a book about race (there’s no racism involved in the storyline), it’s about young people who each have their own sets of skills and problems. Autumn is not only the only female wrestler in her school, she is a very successful one. She’s also a great cook and wants to have her own business one day. The problem is that she is a poor reader and has problems academically. She also has a major crush on a boy called Adonis, who is an academic powerhouse but uses a wheelchair because he was born without lower legs. He manages the school wrestling team and admires Autumn’s skill as a wrestler but looks down on her lack of academic ability. He also dislikes her, a bit of a problem when the girl won’t take no for an answer. But worse than this, Autumn’s parents say if her schoolwork doesn’t improve, she won’t be allowed to wrestle. Can her skills and discipline which she uses in her wrestling help her solve her problems at school?

These are just a few of the YA books available, there are a load more but to be honest, I haven’t read them all yet. You can try Googling “YA novels wrestling” and you should get a few more, you can check them out on Goodreads for some reviews.

One thing I will say is that as these titles are American and so they are not always easy to get in UK. While most of the titles above are available as audio books, on Kindle or from Amazon UK, some aren’t. In the case of Sharon G Flake’s Pinned, some UK firms were charging over £25 for it used!! I ended up getting it from Amazon.com (US) and shipped to me for about half the price.

I hope these little reviews have got some of you interested and I hope you enjoy reading some wrestling novels in the future. Stay Safe, Stay Well” 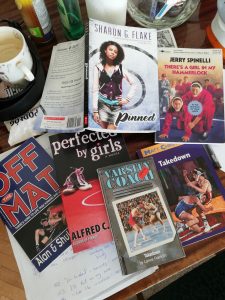