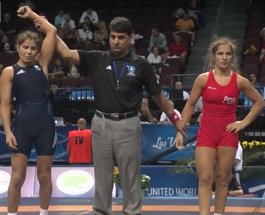 Congratulations to Yana Rattigan who wrestled in 3 matches at the 2015 Las Vegas World Championships and achieved an 11th place.

There were 35 in the weight group and the draw meant that in Yana’s 1/16 round, first match, she met Liliana Costa Dos Santos from Portugal.

The match took place on Mat D and Yana won in the 1st round with a pin after 1min 37secs.

Yana then went on to compete against two times World Champion, Tosaka, from Japan. Yana put up good opposition but unfortunately lost 2-13.

Tosaka went on to take gold in the 48K category, against Maria Stadnyk (AZE), putting Yana into the repechage.

In the repechage, Yana met Narangerel Erdenesukh from Mongolia. In this match, Yana was ahead before being pinned by Erdenesukh, with final points standing at 8-9. 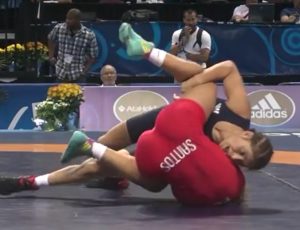 Yana’s ranking in the competition was 11 out of the 35 entrants, a creditable rank but outside the Olympic qualification criteria which demand a top 6 ranking to book a place to Rio.

Yana’s achievement is all the more impressive as she was competing largely unfunded. Yana is highly unlikely to attend any of the other qualification tournaments unless she is able to raise sufficient funds.

To donate to Yana’s goal of competing at the Rio Olympic Games, please go on-line to the gofundme website at http://gofund.me/yu3kums?pc=tw_cr_n