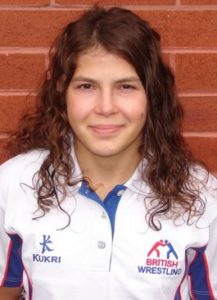 Baku Training Camp
To begin with, I would like to say a special “hi” to everyone; but in particular to those people who really love wrestling, and to those who are involved in the sport in any way – including volunteers, who give so much time to to help elevate the profile of wrestling in the UK.

The GB team were in the sunny beautiful city of Baku from June 26, initially at a training camp for preparation ahead of the Golden Grand Prix, and then for the competition itself.

First day of the camp was very hard, because lots of tasks on the mat involved positional wrestling in standing and partner positions, and as the weather was very hot inside the training hall, it makes it even harder. 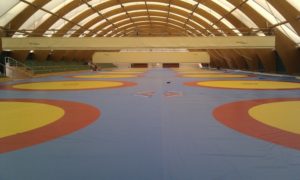 Inside the hall there are 12 mats (four of those mats are for greco-roman wrestlers, four for freestyle, and last four for female wrestlers), and when training it becomes hard to breath, because there is not enough air inside. It gets very, very hot .

The training sessions took place in the morning from 9.30am until 11.30am on the mat, and from 5pm until 7pm in the evening; again mat sessions. On some days training was in a stadium, where we did running ,sprints and special wrestling exercises with partners and elastics.

Training sessions are full of position wrestling and technique drilling, and we also had matches as we would do in competition.

All the girls are working really hard, aiming to win medals at the competition, though the main thing for them is the Olympic Games, and preparation for that is well underway.
A Camp like this is also great opportunity to training with different partners and have different styles of training sessions.

After week in Baku, Japanese, Bulgarian and Russian female wrestling teams arrived for the last week of the camp, and adaptation to the country.
Time went so fast, and every one of us went into the competition itself fully focused, having worked with coaches on the technical and tactical side of wrestling. Sessions consisted of repetitive drilling of techniques, wrestling with partner change, wrestling building, and personalized instruction for each wrestlers style.
All this helps to teach yourself how to mentally and physically prepare yourself during competition, so you learn to compete at your highest level. I don’t know what competition will bring for me, or for any one else here, as hundreds of wrestlers have been training hard everyday. Alas, only a few will be winners.
I believe that young wrestlers in the UK have a great motivation to work hard. When they reach senior age, they will be favourites on world class arenas – they just need to be patient, and keep working hard.

Good luck to every one.Take care yourself and keep working hard on the mat.
P.S. Every one who would like to know some more details about camp and preparation to competition in Baku or just wanna ask me some questions about wrestling or preparation can contact me on facebook or email me yana2012@hotmail.co.uk and I will happy to answer 🙂