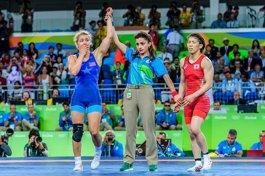 Maroulis, who won the world title at 55kg last year, slipped out of a headlock early in the second period for a 2-1 lead in the 53kg final, then added a takedown with less than a minute remaining to give the United States its first Olympic Games gold medal in women’s wrestling. 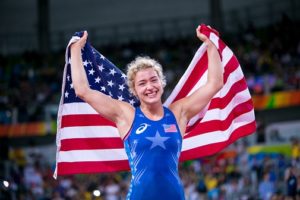 “I’ve been dreaming about wrestling Saori for so long. She’s my hero; she’s the most decorated wrestler ever,” Maroulis said after her victory. “It is such an honor to have wrestled her.”

For Yoshida, it was the first time in 14 years that she had not finished on top of the medals podium after winning three Olympic Games gold medals and 13 world championship titles. 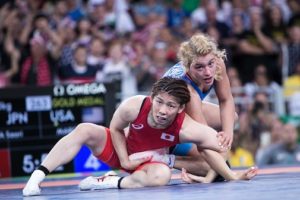 “I should have attacked sooner and more quickly, but (Maroulis) was just stronger than me,” a disconsolate Yoshida told reporters after her loss.

Japanese fans, however, regained some of their festive mood from Risako KAWAI (JPN), who claimed her first world-level title as a senior with three takedowns for a 6-0 win over Maria MAMASHUK (BLR).

Kawai, world silver medalist one year ago, earned Japan its fourth gold medal in women’s wrestling at Rio 2016 and 11th overall since Athens 2004 where the discipline made its Olympic Games debut.

In the finale of the women’s events, Erica WIEBE (CAN) stepped over a failed force-out attempt for two points in the first period of the 75kg final with Guzel MANYUROVA (KAZ). Wiebe then added a double-leg takedown and a spin behind in the second for a 6-0 victory.

Wiebe’s gold medal is the second for Canada after Carol HUYNH (CAN) won the 48kg title at Beijing 2008.
Despite the loss, 38-year-old Manyurova secured her third Olympic Games medal. Previously, Manyurova took a silver medal for Russia at Athens 2004 and then grabbed a bronze medal four years ago in London.

In the bronze medal matches at 53kg, Natalia SINISHIN (AZE) took the last point off three “shot clock” situations for a 2-1 win over Betzabeth ARGUELLO (VEN). Sofia MATTSSON (SWE) dumped ZHONG Xuechen (CHN) to her back off the whistle and heard the slap of the mat at 29 seconds.

At 63kg, Yekaterina LARIONOVA (KAZ) threw Elena PIROZHKOVA (USA) with an arm-trap, back-arching throw early in the second period and pressed for the fall at 4:01. Monika MICHALIK (POL) scored a pair of go-behind takedowns on her way to a 6-3 win over Inna TRAZHUKOVA (RUS
At 75kg, ZHANG Fengliu (CHN) forged an 8-4 back-and-forth win over Vasilisa MARZALIUK (BLR) and Ekaterina BUKINA (RUS) scored a spin-behind takedown in the closing seconds to secure a 5-3 victory over Laure ALI ANNABEL (CMR).
Wrestling continues Friday with the first day of freestyle action in the 57kg and 74kg categories.

With thanks to William May // Photo: Gabor Martin, United World Wrestling