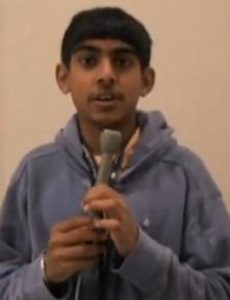 Ranvir Sandhu (14 years old,) who has already been wrestling for seven years, presents a short video diary of his experiences at the Youth Training Camp organised to run concurrently with the FILA World Senior Wrestling Championships in Denmark, 21st – 27th Sep…
Ranvir learnt many new wrestling techniques at the Youth Training Camp and made many new wrestling friends from overseas but also had the opportunity to create a video diary.
In connection with the World Wrestling Championships (WWC,) The Danish Wrestling Federation put together a project called “Youth reporter at WWC.”  The Danish Ministry of Culture gave the WWC 2009 Organising Committee financial support to realise their project. It involved young people from the participating countries in sending out features from the WWC 2009 to national television and web-tv for websites in their home countries.
To help them make their stories and get them home, Video Journalists from Denmark’s national journalist education centre were hired as support.  Coordination was carried out by Jakob Wärme Hansen of The Danish Wrestling Federation.
Said Ranvir, who has an ambition to wrestle at the World Championships one day, “This was an unforgettable experience!”
Share